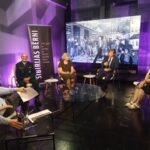 The discussion was moderated by Sandy Semyonov. The following participated in the discussion: