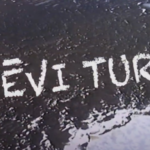 On May 4, 2016, as part of the Latvian film marathon organized by the National Cinema Center in the “Splendid Palace” cinema, the premiere screening of the documentary film “The Fathers Over There” in the cinema Splendid Palace  at 2:30 p.m. After May 4, the film was screened in the Latvian Cinematographers Union (LKS) project CINEMA FOR EVERYONE AND EVERYWHERE IN LATVIA. On June 14, 2016, the film premiered on LTV1.