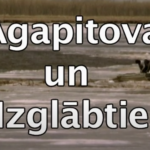 Movie about returning to the north, in the past. Plahina, Agapitova, Igarka and other giant counties are the edge of the northern land, where Ilmārs Knaģis ended up in 1941, when together with 4 thousand children from Latvia he was deported to Siberia. In the fall of 1942, 700 mothers and children of different nationalities landed on Death Island in Agapitova, around 60 people were saved, including 6 Latvian children – Biruta Kazaka, Pavels Kliesbergs, Venta and Ilmārs Grāvīši, Pēteris Bērziņš, Valentīna Voišiša. The memories are poignant, even incredible. In the leisurely course of the film, we will see the old men who stayed in Siberia, whose dream of returning to Latvia has disappeared, their lives have been spent in exile.

y it happened and why there is nobody to blame? Maybe this endless return is search for time taken away? North deported generation turns into frozen land of ice and water. Those remaining disappears day by day. I am still desperately trying to stop time. In the hope that my words will not leave with me. – In fact, I did not forget. However, many seem to have seen a motion picture. Too incredible it was. But thousands and thousands tens of millions have experienced something similar here, and more violent. All our nowadays mind is raped and distorted that the events which there is no similar in the history of mankind, now seems normal …
(I.Knaģis)