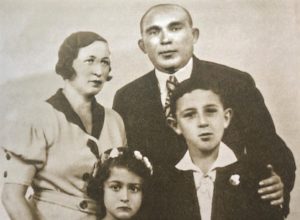 Memoirs of Jews who were taken from Latvia to Siberia in 1941 and  1949.
Interviewers: Aivars Lubānietis and Dzintra Geka
Editors: Irēna Pārupe, Liveta Sprūde, Baiba Kazule, Dzintra Geka, Žanna Ezīte
Publisher: Fonds “Sibīrijas bērni”
658 pages. Year 2020. Text in 3 languages – latvian, russian, english.
Book created in support of fondation “Uniting History”
It is amazing how many people, through unimaginable difficulties and trials, have been able to maintain a hopeful outlook on life, forge strong character and willpower in their experiences,have been able to survive with success and not allow scars to overwhelm them, but to devote their energies to turn the wounds into strength, hope, and a pulsating beam of heart light. We have all had to come home to Latvia, which has regained its independence, in its own way. Today’s duty and responsibility is to continue the work of actively collecting life stories – this is necessary not only for history, but also for our nation, by listening and understanding each other deeply, to continue to strengthen the bridge of unity. The stories and characters of human life form the soul and conscience of the people. Although so scattered in the world, they are all united by Latvia. The stories of folk life form a bridge through which everyone can come home. In Latvia.

The second largest nation that suffered in the 1941 deportation is the Jews. Those who escaped returned to Latvia, but their relatives were destroyed during World War II. In the 1970s, most managed to leave for Israel. We also interviewed Siberian children there. We have interviewed 670 people in Latvia, Russia, Israel and America. We have received many expressions of light, love and hope for the future of our Latvia. We want to pass it on to future generations.

There are no reviews yet.